Posted on September 26, 2012 by Sebastian 1 Comment
Most professional devices which require high accuracy and precision have an input for some sort of external frequency reference. The frequency 10 MHz is an industry standard particularly for test equipment. Most reference generators are designed for lab use and therefore are bulky and unsuitable for portable use. Abracon now offers a pocket-sized portable solution.

Not too long ago, I wrote an article about the AOCJY1 series high stability OCXOs from Abracon. While I was writing that particular article, I visited the manufacturer’s webpage and found a product I thought to be rather neat. It is the Sync’n Go (SYNC-10.00MHz), a stand alone 10.00MHz battery-powered portable precision frequency reference.

Just the idea to have a very compact battery powered frequency reference source got me interested but the Sync’n Go has even more to offer. The key feature is a fully automatic synchronization circuit. One can sync the Sync’n Go’s internal oscillator to a more accurate reference (e.g. GPSDO, Rubidium standard, etc.) literally at the push of a button. 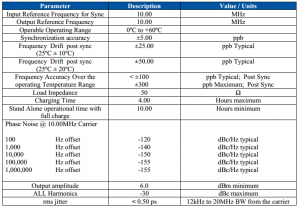 Tech Specs of the Sync’n Go

10 hours of battery operation time, low phase noise and a frequency accuracy of typical smaller than 100 ppb over the entire temperature range (0 °C – 60°C) are key properties of this interesting device.

Abracon agreed to ship out a review sample to me without hesitation. That is always a good sign as manufacturers which are aware of major flaws in their products will usually not agree to such a review at all. It also shows that Abracon is interested in constructive end-user feedback and hearing about their experience with their product. 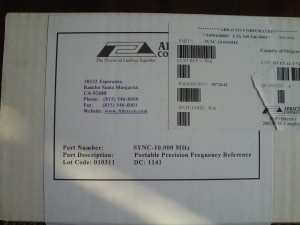 The front panel of the Sync’n Go is kept as simple as possible. 2 SMA connectors, one USB connector, three LEDs and two push buttons – that’s all. The USB connector doesn’t actually supply any USB functionality, it’s merely for charging the battery. Using a standard mini USB is a smart design choice on Abracon’s side as they become more and more de facto industry standard for portable devices. 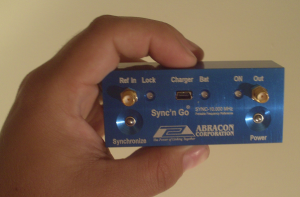 Trying it on for size: The Sync’n Go is extremely compact

One SMA connector is for the 10 MHz output and delivers 6 dBm into 50 Ohms. The other SMA is for syncing the device up to a more accurate reference frequency. Since BNC is a more common standard in the test equipment world, it would have been nice to include a short SMA male to BNC male cable. 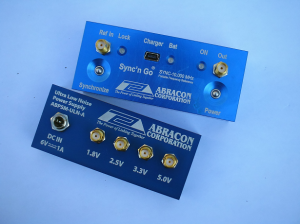 The three LEDs are labeled Lock, Bat and ON. On is self-explanatory and lights up green when the device is switched on. If the battery is low, the Bat LED will start to flash red slowly. If the battery is really dead, the LED will flash red rapidly before the device goes to sleep. Bat indicates that the charge process is in progress by blinking green. A steady green indicates that the charging process has been completed. The Lock LED is important during the synchronization process.

Output waveform of the Sync ‘n Go on a LeCroy WaveAce oscilloscope. The output is a very clean sine wave.

Top: Output signal, Bottom: FFT of the output signal. Clearly visible is the 10 MHz peak on the left. The tiny humps to the right are present even if no signal is connected to the scope and therefore to be assumed noise of the scope itself. 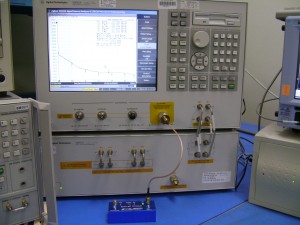 Abracon’s Ying Huang synced a Sync’n Go up to a GPS reference and hooked the device up to an Agilent E5052A Signal Source Analyzer for me. The E5052A has been calibrated by Agilent in March, 2012 and is good until March, 2013. The measurements meet or exceed all values in the datasheet. 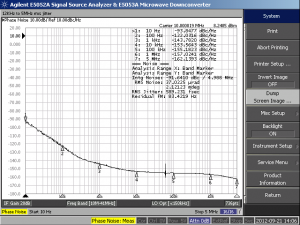 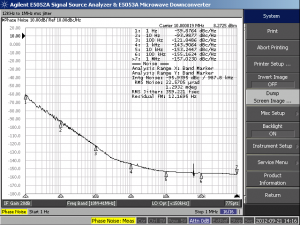 Additionally, we get to take a look at phase noise figures that aren’t in the datasheet. For instance ~ 60 dBc/Hz with a distance of 1 Hz to the carrier and ~ 94 dBc/Hz with a distance of 10 Hz to the carrier. Think about that for a second, those are extremely good phase noise figures. The Agilent E5052A also indicates a residual FM of 12.16 Hz and an rms jitter of 359 fs with a domain of 1 Hz to 1 MHz. The jitter is definitely far better than what Abracon guarantees in the datasheet (< 0.5 ps). While jitter and residual FM are both phase noise related values, they say nothing about the noise shape and are therefore often considered obsolete. Asides from the obvious use for supplying an accurate and precise reference for portable test equipment, I can see great use for amateur radio microwave projects. Most transverters have the option for an external reference input, however, they usually need a different reference frequency than 10 MHz. I will shortly post a small tutorial on how to derive a different frequency (for instance 116 MHz for 10 m / 144 transverter) from a 10 MHz reference without using a noisy PLL. The Sync'n go is $ 493.42 from digikey and I think that this is an excellent price/performance ratio. I would absolutely not mind if someone would like to give one to me as an early Christmas present ;-). Just saying ... If you are interested in a practical demo on how to use the Sync'n Go, I recommend the following video by Syed Raza (Director of Engineering, Abracon Corporation):