Posted on September 2, 2012 by Sebastian 4 Comments
A phase detector generates a voltage proportional to the difference in phase between two signals. They are used in Phase-Locked-Loop (PLL) designs and PM / FM demodulator circuits. But how do they work?

I promised in a previous blog article titled ‘No Tune NE602 / NE612 FM Demodulator’ that I would explain how a quadrature FM demodulator works in another detailed article. The article briefly mentioned how the Gilbert cell mixer NE602 is being ‘abused’ as a XOR gate which is being used as phase detector. Let’s have a closer look at exclusive OR based phase detectors.

If one applies a rectangular signal with exact same parameters, such as frequency and amplitude, to an XOR gate, the output of the XOR gate will be a logical 0 if the phase difference between the two signals is 0°. This is because the two signals have the exact same logical state at any given point in time.

Logic levels on the XOR gate. Signal 1 (top) and signal 2 (middle) have a phase difference of 180 degrees. The bottom line is the output of the exclusive or gate.

For this experiment I am using a HEF4030 with a supply voltage of 10 Volts.

Alright, now we took a look at the two extreme values. So far it’s easy to follow. But what happens if the phase difference is somewhere between 0° and 180°? Well, let’s try it out, shall we?

Let’s hook up two rectangular signals with the same amplitude and frequency but 90° phase difference to the input of the XOR gate. I captured the in- and output signals with a logic analyzer. Here’s the result:

Signal 1 (top) and signal 2 (middle) have a phase difference of 90 degrees. The bottom line is the output of the exclusive or gate

We can write out a formula describing this behavior like this:

If we want to extract only the average voltage and reject the rectangular signal, we can do that with a simple RC low pass filter. 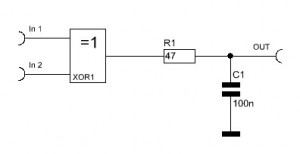 If one only cares about the relative change is phase difference, for instance in an PM demodulator circuit, one can add another capacitor to extract only the change in the voltage ( which is proportional to change in phase difference).

This circuit is capable of recovering audio (or data) from a phase modulated signal. To test this circuit one could use a signal generator to apply a signal of constant amplitude, frequency and phase to input one. If then a phase modulated signal of same frequency and amplitude is applied to input 2, the recovered audio (or data) will be available from the output of the above circuit.

This circuit can easily be assembled even by beginners. I used a little piece of perforated PC Board for this experiment.

To turn this whole circuit into an FM demodulator one only needs to add a frequency dependent phase shifter. A simple parallel LC tank circuit and a capacitor will serve this purpose well. 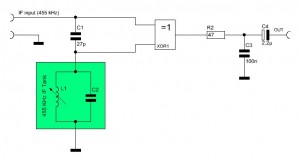 For a 455 kHz IF possible values for L1 and C2 could be 820 microhenry (L1) and 100 pF (C2). Mathematically the resonant frequency is much higher than 455 kHz, yet practically it will fit perfectly. This is due to parasitic stray capacitance / inductance in the circuit. Those metal shielded IF filters, often referred to as IF can, would do an excellent job as LC tank circuit as well. They are, however, difficult to come by nowadays.

In case you would like to see what exactly is going on in the phase shifting network, check out my article ‘How it works: Quadrature detector‘. 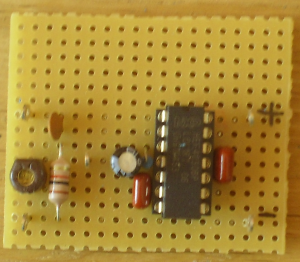 4 thoughts on “Exclusive OR (XOR) gate based phase detector”