Posted on October 11, 2012 by Sebastian Leave a comment
Blown capacitors have been around as long as capacitors themselves. Replacing defective capacitors is something every electronics engineer should be capable off. Let’s have a look how to turn a broken LC Display back into a functioning device.

Free TVs and computer screens are almost literally laying on the side of the road. About a quadzillion of Liquid Crystal Display (LCD) or Thin Film Transistor Liquid Crystal Display (TFT LCD) technology based TVs and computer screens are deemed defective and tossed away every day. A majority of them only have a minor flaw that can easily be fixed by novices.

Defective electrolytic capacitors usually stick out by a big bulge on the top. They are designed to burst exactly at that location. That is why there are several lines carved in the metal layer on top of the capacitor. If the pressure becomes too big, the metal will open along the carved lines and act as a pressure release valve. 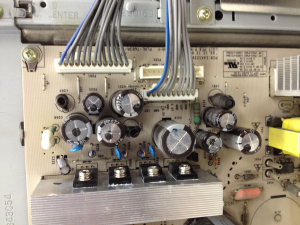 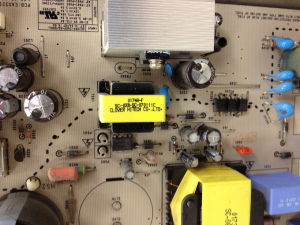 Blown capacitors are probably the most common reason for a LC Display failing. It is actually so common that one could speculate whether or not this is actually intended by the manufacturer to make sure you will soon buy a new TV or computer screen.

Looking on eBay for broken LCDs that just won’t turn on can be a good bargain source for a new TV.