Posted on April 2, 2013 by Sebastian 27 Comments
Impedance matching is an everyday problem for RF circuit designers. The L-Network is one of the easiest lossless ways of matching a low source impedance to a higher load impedance. This article shows how they work and how to design them.

Matching a transistor amplifier’s low output impedance with the higher impedance of an antenna (typically 50 or 75 Ohms) is just one everyday example of where an L-Network can be used. For this article, we are going to design an L-Network that matches a 75 Ohm source (function generator) with a 1 kΩ load (resistor).

To make it easier for you to understand how this network works, I will present the complete circuit first, explain how it works and then explain how the values are being calculated. Here is the finished L-Network:

Note that the reactance of a capacitor and an inductor is frequency dependent. Therefore, this circuit does not work well over a large bandwidth.

This circuit makes the 1000 Ohms load ‘look’ like a 75 Ohms load to the source. But how does it work? To answer this question, we have to look at the equivalent circuit. For that, we will reduce the overall circuit to simpler elements, step by step.

Let’s start with Cp and RL. They are in parallel. The overall impedance of two resistors is calculated as follows:

Likewise, the resulting complex impedance of a resistor and a capacitor can be calculated as follows:

In our case, we get:

75 is the real part in Ohms and -j263 is a capacitive reactance of 263 Ohms. That means the capacitor and resistor in parallel will act like a resistor with 75 Ohms and a capacitor with 263 Ohms reactance in series.

Equivalent circuit for Cp and RL

Now if you insert that back into the original circuit and have a close look at it, you may notice something. Look at the reactance of Cp and Ls.

Correct, the reactance of both the capacitor and the inductor are the same, just with different vectors. If you have never worked with a complex impedance beforehand, you will now be amazed by how much easier it makes things. We can simply add the reactances together, and since 263 + -263 is zero, we only have the 75 Ohms load resistance left. Yes, it’s that simple, the source ‘sees’ the 1 kΩ load as a 75 Ω load.

Overall equivalent circuit of the L-Network

An often-welcomed side effect is that this L-Network acts as a low-pass filter. So, if it’s used to match a low transistor amplifier impedance directly to the higher antenna impedance, one suppresses harmonics at the same time.

If one wishes to have a high-pass characteristic, one can simply switch the positions of the inductor and the capacitor. It really changes nothing. The impedance values, of course, need to be properly adjusted in that case.

Let’s talk about how to design a circuit like this from scratch. We will use the above values, source impedance of 75 Ohms and load impedance of 1000 Ohms at a frequency of 16 MHz. The frequency doesn’t matter until the end when we have to pick actual values for Ls and Cp.

The first thing we have to calculate is the quality factor, or Q factor. It describes how under-damped an oscillator or resonator is, or equivalently, characterizes a resonator’s bandwidth relative to its center frequency. The Q of an L-Network is calculated as follow:

With our values plugged into the equation, we get the following:

So 3.512 is our Q. The rest is just as simple. To get the needed impedance of the inductor, we use the following formula:

That means the inductor needs to have an impedance of 263 Ohms at the desired frequency. We can write this as j263 to make sure it’s apparent that it is an inductive reactance. The impedance of the capacitor needs to be the load resistance divided by the Q factor.

Again, this means that the impedance of the capacitor at the desired frequency needs to be 284 Ohms. Using the vector notation, we write -j284 to indicate that it is a capacitive impedance.

That means our inductor needs to have a value of 2.6 μH. I chose a value of 2.2 μH as it is a common value I had in stock. Since the circuitry itself in real life usually contains what’s called parasitic inductance, it won’t throw the circuit off by far. Next up is the capacitor:

Instead of 35 pF, I used a 33 pF capacitor. Not only is it a more common value, we can again assume a little bit of stray capacitance by the remaining circuit. 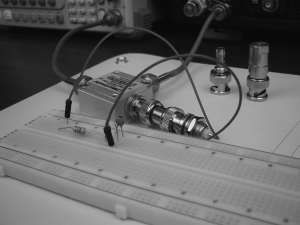 I used a return loss bridge, a signal generator and an oscilloscope to verify the performance of this circuit. And sure enough, it acts just like a 75 Ohm resistive terminator at about 16 MHz. The exact frequency for best operation turned out to be roughly 16.1 MHz. 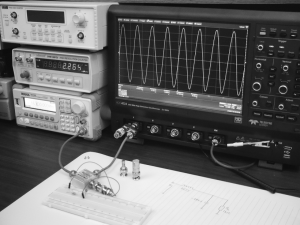 Update (04/06/2013): I previously wrote that one can not match a high impedance source to a low impedance load. That is incorrect. Naturally, it works perfectly fine the other way around. One only has to switch the position of the load and the source.

KJ6QBA took out the time to simulate this circuit using LTspice. He also simulated the same circuit used in reverse to match a 1000 Ohm source to a 75 Ohm load. Here’s the result: 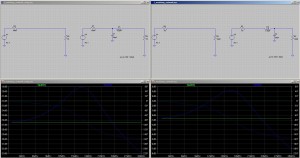