In a previous video I have shown how to generate test signals for a VOR radio navigation system for aircraft.. This article will take a look at another radionavigation system, the Instrument Landing system or “ILS” for short. The ILS is used by aircraft around the world every single day. It is designed to guide aircraft safely to a runway even with bad or no visibility.

In order to provide both lateral and vertical guidance, the ILS consist out of two individual subsystems. The part used for lateral guidance is called the localizer. For the vertical guidance component the term is glide slope. Both localizer and glide slope use a surprisingly simple way of telling on aircraft where to go. The localizer and glide slope each consist out of two independent transmitters with the same frequency and a special antenna array. The antenna arrays each create a radiation pattern with two sidelobes. One sidelobe per transmitter. One sidelobe is fed by a transmitter modulated with a 90 Hz signal and the other sidelobe is fed by carrier modulated with a 150 Hz signal. The antenna pattern is so that the two sidelobes overlap with equal intensity when the aircraft is exactly on the intended path. An AM receiver tuned to the frequency of either the localizer or glide slope will “hear” both the 90 Hz and 150 Hz tones with equal intensity when on the right path. Sounds complicated? Let’s try a picture: 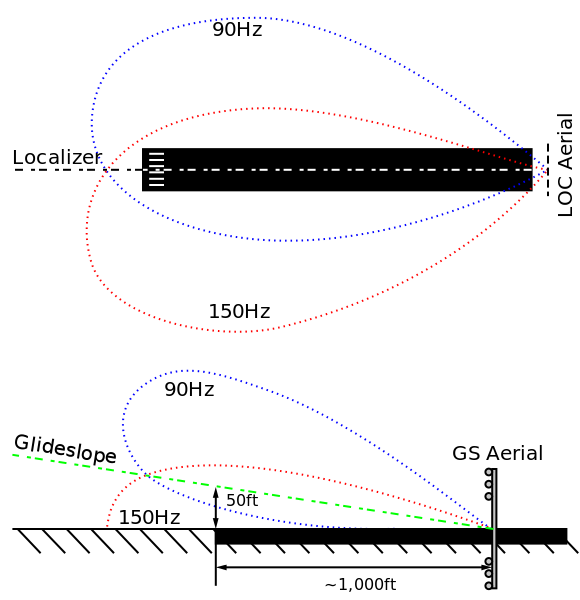 So how does the airplane (and the pilot) know where to go? The ILS receivers simply compare the intensity for the 90 Hz and 150 Hz signals and display the difference. This is done independently for the localizer and the glide slope. If the 90 Hz and 150 Hz tone intensity is exactly the same, the plane is on the right path. But if one signal becomes stronger than the other, the plane is off the desired path. In the case of the localizer for instance, the 90 HZ tone will be stronger if the aircraft is off to the left of the desired course. And accordingly, the airplane is off to the right of the desired course if the 150 Hz tone is stronger. For the glide slope a stronger 90 Hz tone means that the plane is above the intended glide path. For a dominant 150 Hz tone on the glide slope, the plane is below the intended glide path. Simple, isn’t it?

It’s so simple that even some handheld airband radios can decode ILS signals and offer a backup for on board instruments in case of an instrument or electrical failure. An example for such radios are the Yaesu FTA-550 (localizer only) and the FTA-750 (localizer, glide slope and GPS). I recently bought a FTA-550 and when it arrived, I wanted to test it. Unfortunately, I live out of reach of a ILS localizer. But no problem, I’m an engineer. 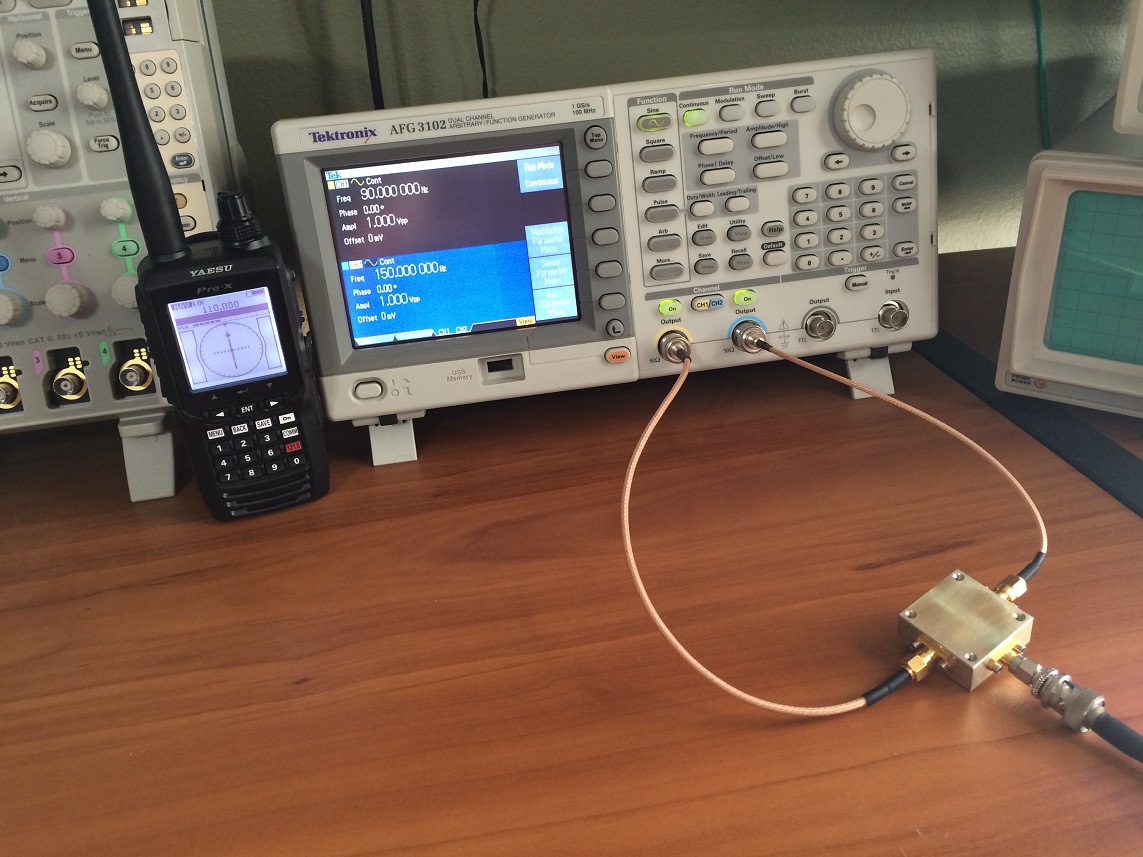 To generate the 90 Hz and 150 Hz signals, I used by Tektronix AFG3102 signal generator. The two signals were fed into a resistive combiner and from there directly into the external modulation input of my HP8657D. The HP8657D signal generator was set to amplitude modulation and a frequency in the airband, 110 MHz in this case. When you do experiments like this, make sure that you use very low power, a frequency that is not used in your area and abide all communications laws. The last thing you want to do is to interfere with a real aircraft. It is advisable to use a shielded connection to the radio regardless of power.

With equal amplitude of the 90 and 150 Hz signal, the localizer needle of your ILS receiver should be exactly in the center. As you can see on the picture, my FTA-550 passed this test with flying colors. You can test the glide slope portion of your receiver in the same fashion. The glide slope transmitters transmit on UHF. So that the pilot isn’t bothered with entering two frequencies, the VHF localizer and UHF glide slope frequencies are paired so that only the VHF frequency needs to be known. IF you want to test the glide slope portion of the receiver, you need to look up the UHF glide slope frequency corresponding to your VHF localizer. You can look-up ILS frequency pairs on the internet [2]. 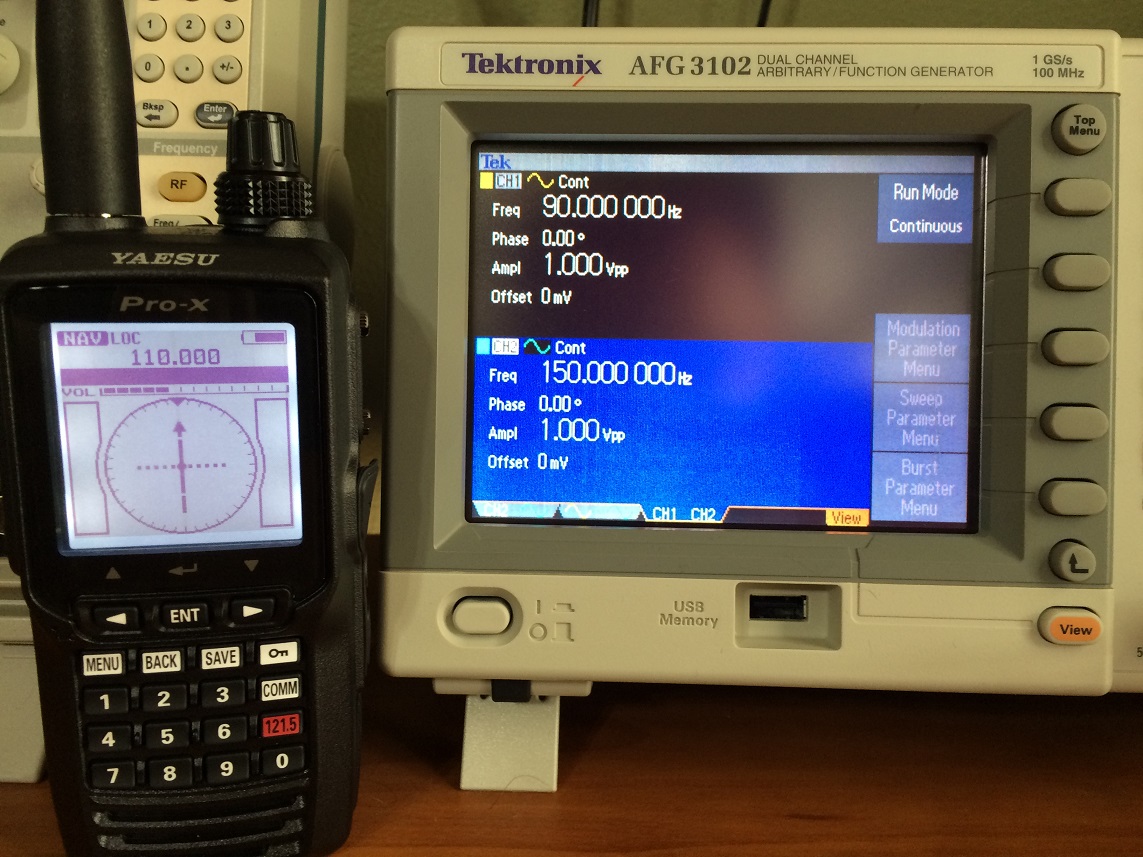 If we lower the 90 Hz signal’s amplitude, we expect the receiver to show us to the right of the correct course. As you can see on the following picture, the FTA-550 masters this test as well. 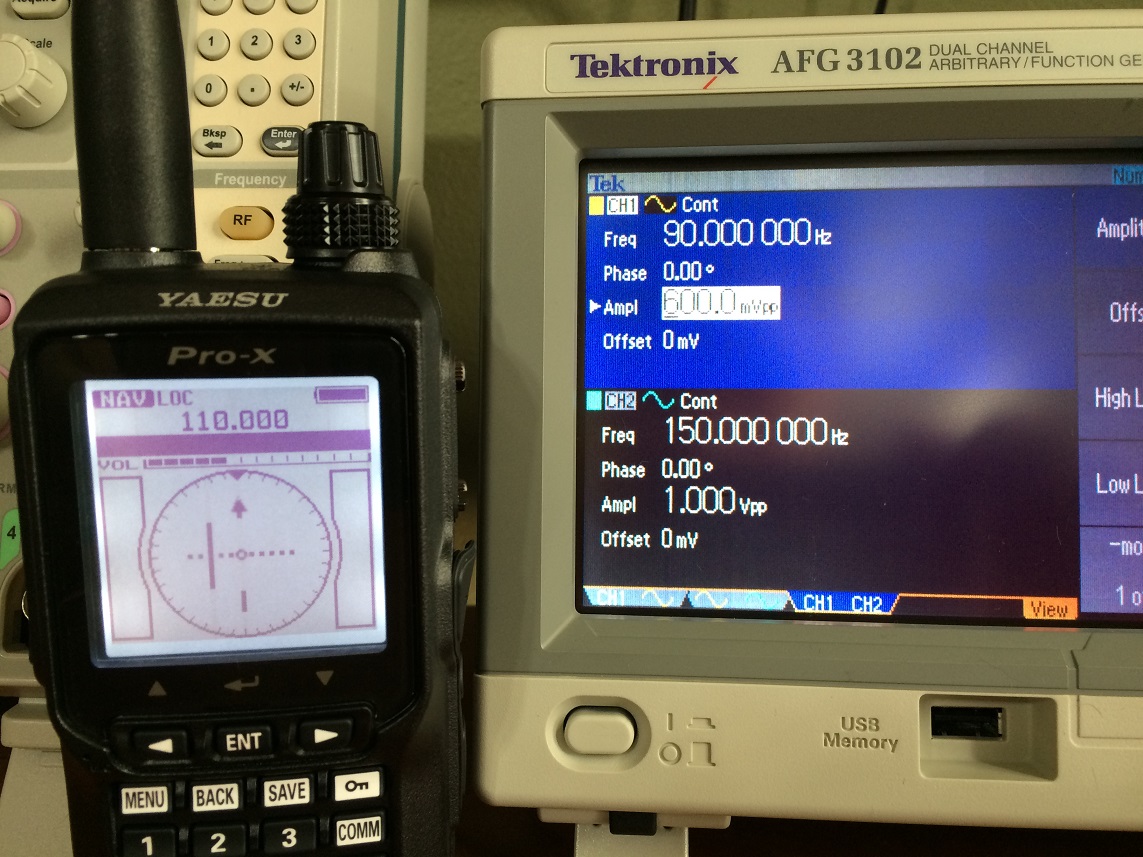 This article is a great example how complex avionics systems can be tested with inexpensive and readily available test equipment. Avionics shops spend tons of money on specialized test equipment. Some are required to be compliant with the law, some aren’t. But on the avionics test market there appears to be a large gap between “super old and cheap” and “brand new but very expensive” when it comes to specialized test sets. Using standard off-the-shelf test equipment may be an alternative to get state of the art test sets for little money.