Posted on April 9, 2022 by Sebastian Leave a comment
The NXP MRF101 series high ruggedness N-channel Enhancement-mode lateral MOSFETs promise over 100 Watt CW output power and slightly over 20 dB gain from 1.8 MHz all the way up to 250 MHz. Their mismatch insensitivity for a VSWR of greater than 65:1 without significant device degradation makes these devices extremely interesting for amateur radio operators. While there a plenty of designs for the HF + 6m Bands on the internet, I wanted to see what it takes to use them on the 2m VHF band. 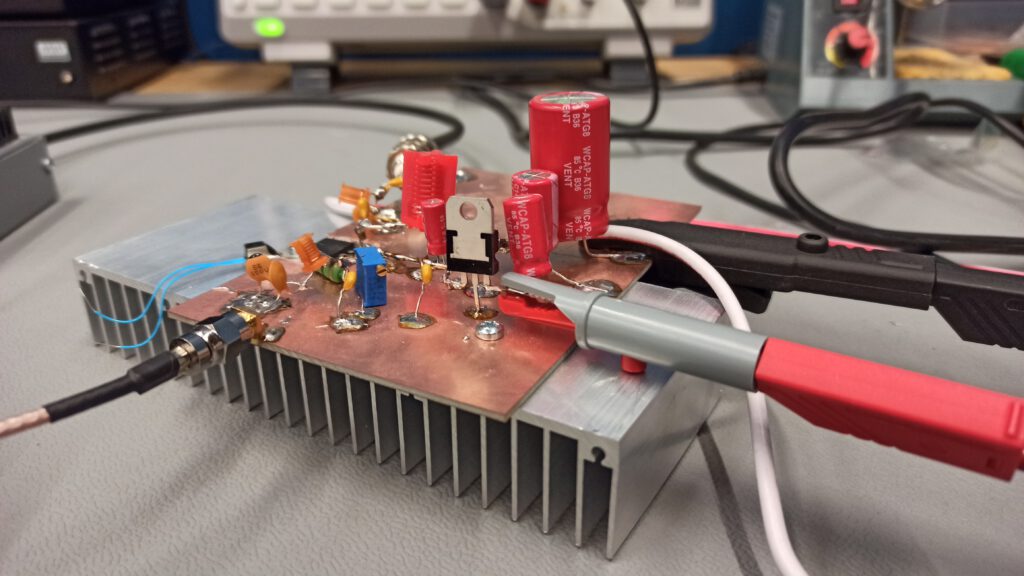 For this experiment a single MRF101AN was used. The MRF101AN is suitable for single band PAs on the 6m (50 MHz), 4m (70 MHz) and possibly 1.25m (222 MHz) band. Operation on the VHF broadcast band (88 – 108 MHz) may also be an interesting application for some people. The 2m band (144 – 148 MHz) was selected for initial prototyping and proof of concept. For no other reason than that it seemed the most interesing to me.

The target was an input VSWR of less than 2:1 over the whole frequency range of 144 to 148 MHz. The quiescent current was set to 100 mA as per the datasheet recommendation. The biasing voltage was supplied to the gate via a resistor. From an AC standpoint, the resistor is connected to ground through a capacitor and is part of the input matching network. This is a common technique used in power MOSFET RF design.

I elected to use a simple L-Network for the impedance matching. I recommend reading my article on L-Network impedance matching [2]. It should be noted that for reasons of stability, the input of a power MOSFET should never be matched directly to 50 Ohms. The common design practice is to load the gate with a resistor and then match that to 50 Ohms. The output of a power MOSFET on the other hand can be matched directly to 50 Ohms. 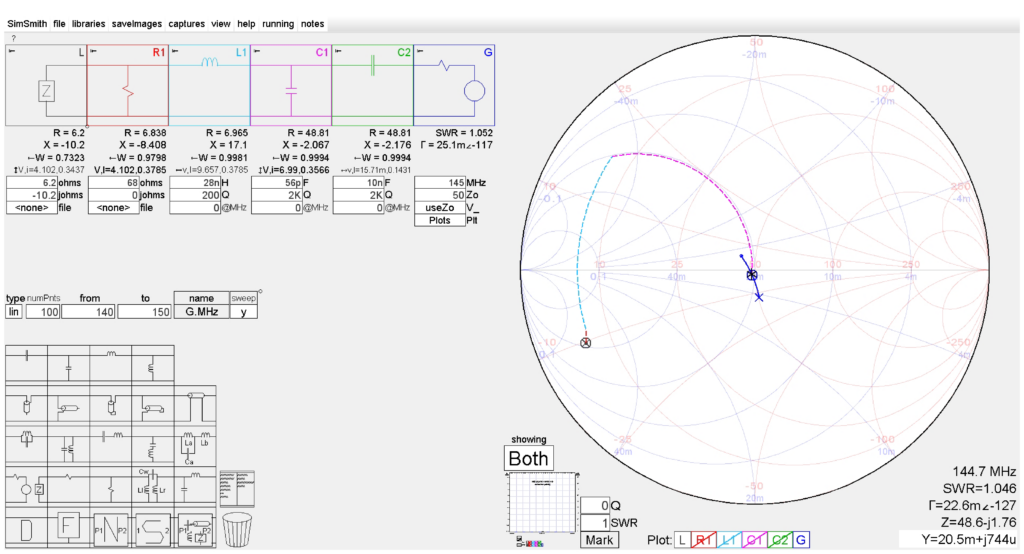 When these values were tested, nothing seemed to work as intended though. This was no surprise since the prototype was built Manhattan-style. Building a circuit like this Manhattan-style is probably not the most wise design choice. But it certainly is possible. It should be noted that the prototype had a tendency to oscillate between 160 – 170 MHz. The oscillations seized once a bare copper board was placed between the gate and drain sides of the MRF101AN. Additionally, the amount of parasitic reactances threw of my matching circuits. It was apparent that the series inducor was too large. So I grabbed the next smaller size adjustable inductor I had in my parts collection. Now they’re likely too low, but this is just a proof-of-concept protoype. As long as the general circuit works, the exact component values can be adjusted once a proper PCB is designed.

This is the schematic of the “final” prototyping circuit that I used for my tests: 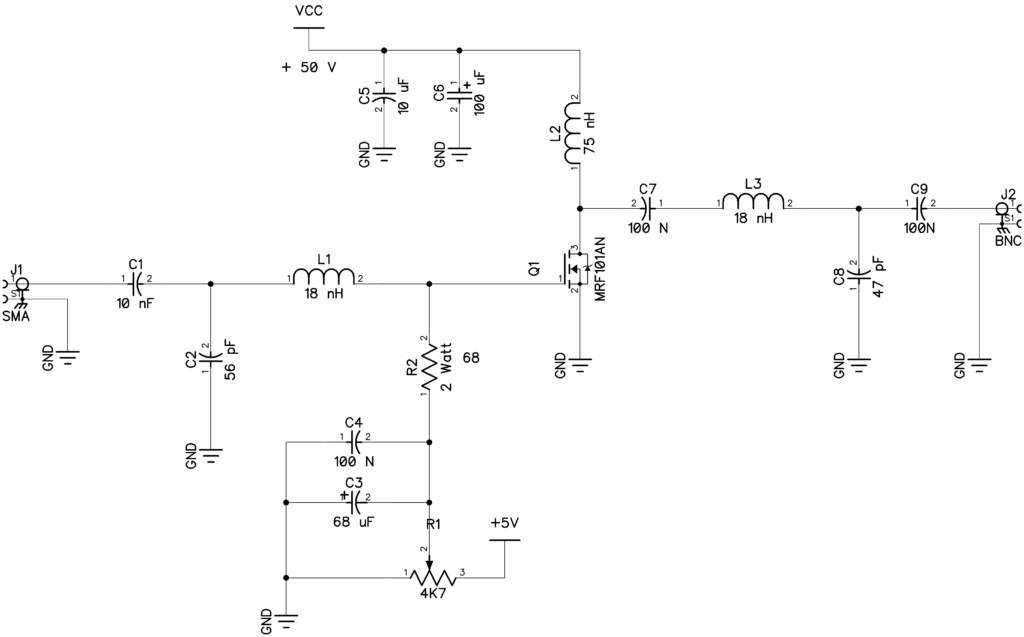 All simulation and guesswork asided, what really counts is results. Not much effort was put into the testing of the circuit. Just enough to be assured that a PCB with this general topology can be designed and ordered for fürther component value optimization. No tests for linearity and efficiency where performed. For all tests, the quiescent current was set to 100 mA. The prototype was supplied with 50 Volts DC. The output was properly terminated with a 50 Ohm dummyload. A large heatsink made sure that the MRF101AN stayed within its permissible operating temperature range.

The input VSWR of the power amplifier prototype was measured using a properly calibrated Nano VNA. As expected, the input VSWR isn’t perfect. But it is within the design criteria of less than 2:1 over the whole band: 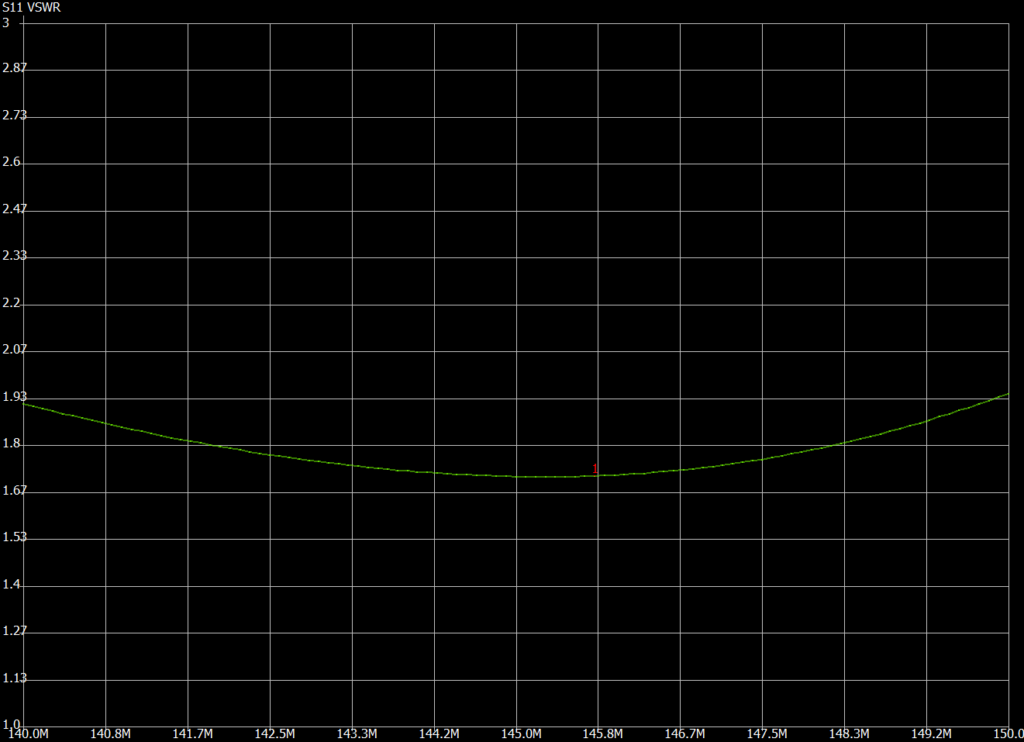 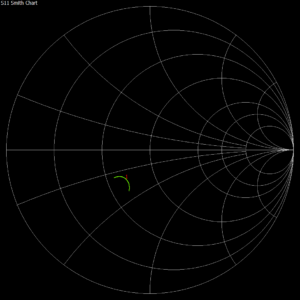 To test the output power of the power amplifier, a simple FM transceiver delivering about 1 Watt of RF power was connected directly to the input of the MRF101AN power amplifier prototype board. A Siglent SDS1202X-E was used to look at the resulting output waveform from the dummyload through a 1:100 oscilloscope probe. 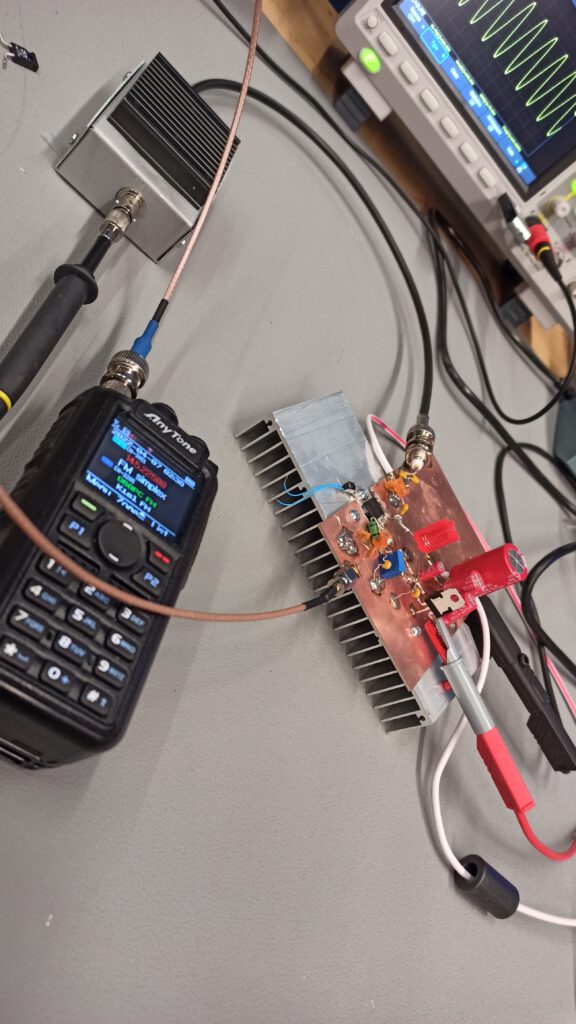 The resulting measurements would – if true – indicate that an output power of a little over 100 Watts was indeed achieved: 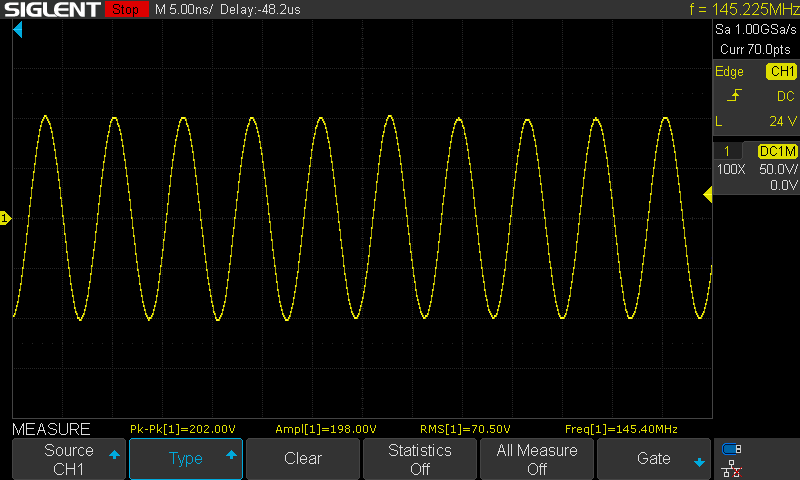 However, the results should be interpreted very sceptically. The measured output waveform appears to be very sinusoidal. But in reality, the signal likely looks very distorted. While the L-Network on the output of the amplifier certainly has a low-pass filter characteristic, not much harmonic suppression canbe expected by it. The oscilloscopes maximum bandwidth of 200 MHz makes it impossible to visialize any harmonic components of the signal. Therefore, the displayed waveform and indicated RMS voltage needs to be interpreted very carefully.

Additionally, the input current into the amplifier prototype was only around 2.3 A. That equates to 115 W DC input power. Assuming 100 Watts of RF output power, the resulting efficiency would be around 87 %. While such an efficiency would surely be impressive for such a simple set-up, it is also highly doubtful. Nonetheless, the dummyload gets noticeably warmer after just a few seconds of full power output.

The results are promising enough to design a PCB layout and continue testing this set-up. Expect a follow-up on this topic.

Also, I would like to get some feedback on whether or not a 4m-Band linear amplifier kit would be of interest for the amateur radio community?